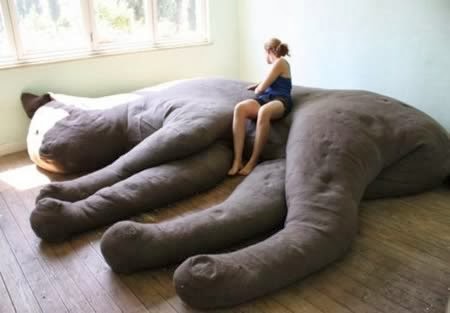 It might be pretty creepy to rest your weary bones upon this gigantic stuffed cat couch, but it sure looks mighty comfy. Unfold, a design studio in Antwerp, Belgium, built this enormous couch. But they would rather refer to it as a sculpture named Felix Domesticus. It was one of five cat-themed elements of an art installation that the studio assembled in 2010. The 3.5-meter long cat fills an apartment's master bedroom. Visitors to the exhibit could sit on it for what Unfold calls “sweet revenge.”(Source) 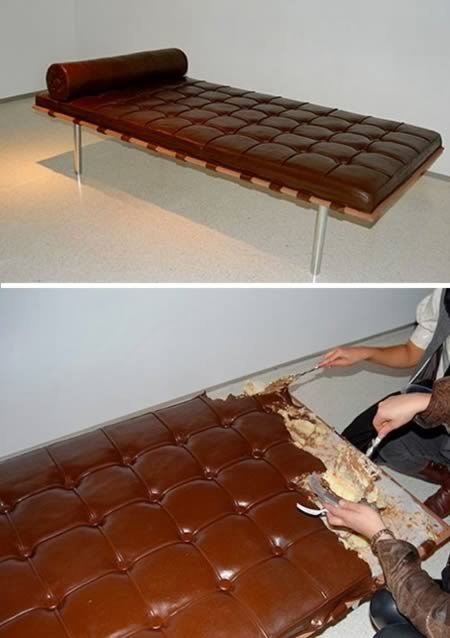 Artist Leandro Erlich made this amazing looking edible chocolate couch that looks deliciously inviting. The couch was made for a series called “Let Them Eat Art.” (Source) 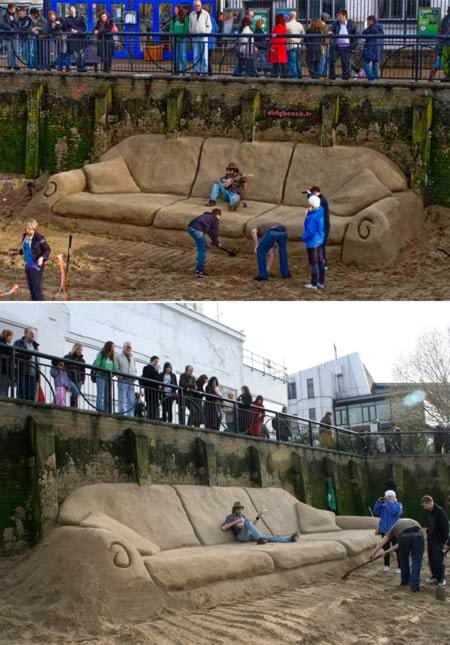 This was the largest sand couch ever made. It was created for the London Marathon by Andrew Robertson, who is best known as “Sandy Andy,” a man who has taken the little strip of sandy beach across from Gabriel's Wharf on the Thames and transformed it, with the help of his crew, into The Dirty Beach. (Source 1 | Source 2) 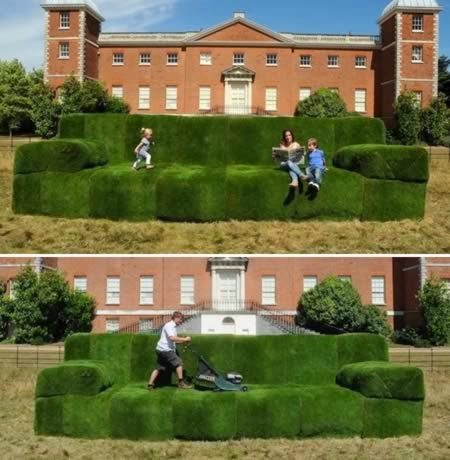 In 2010, a dozen huge grass couches were installed at tourist attractions around the UK in a bizarre bid to get couch potatoes out of the house.
The sofas, some of which are 30ft long, were the idea of the National Trust and were made from a base of straw which was watered, trimmed to size, and covered in a green grass blanket.
Bosses came up with the odd idea after it was revealed that the average family spends 43 hours a week sitting on their couch, even in the summer.
Each sofa was positioned in an "outdoor living room" and took just over a month to grow.(Source) 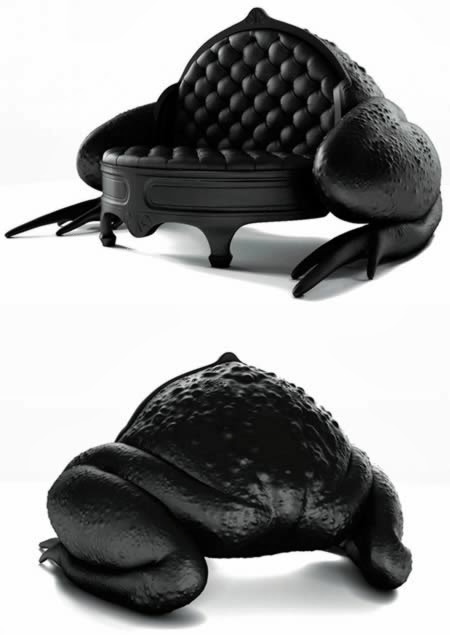 The Toad Sofa is the latest piece of furniture from the Animal Chair Collection by Spanish designer Máximo Riera. The couch resembles the common species of the tailless amphibian that inhabits the European and north African continents. Emerging from hibernation as an oversized piece, it constitutes the first two-seater of Riera's "animal chair collection."
Riera is a poet, photographer, sculptor, and former medical industry worker who has a studio in Cadiz, a historic naval port near the Strait of Gibraltar. The Toad Sofa is the latest in his line of animalistic furniture. He kicked off the bizarre series with the Octopus Chair, which was lifelike enough to make an old salt dash for the Kraken harpoon, and migrated to chairs mimicking a rhino, a walrus, an elephant, and a whale. (Source) 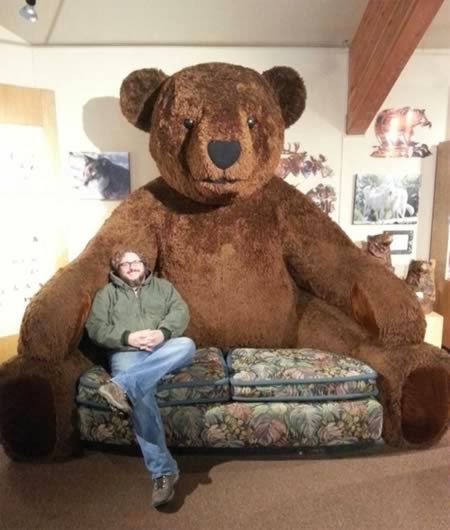 The Grizzly & Wolf Discovery Center is the permanent home of the world-class exhibit BEARS: Imagination and Reality. After traveling the country with phenomenal success, the Center was able to acquire the exhibit as yet another educational tool. The display is an interactive museum exhibit produced by the Science Museum of Minnesota comparing and contrasting the bear of myth, art, literature, history, and folklore with the bear that scientists, outdoorsmen, and researchers know. Features include over 25 taxidermic mounts of grizzly and black bears in naturalistic settings with examples of eating and behavioral habits, but perhaps the most amazing piece of this exhibit is their 8-foot-high bear couch. (Source) 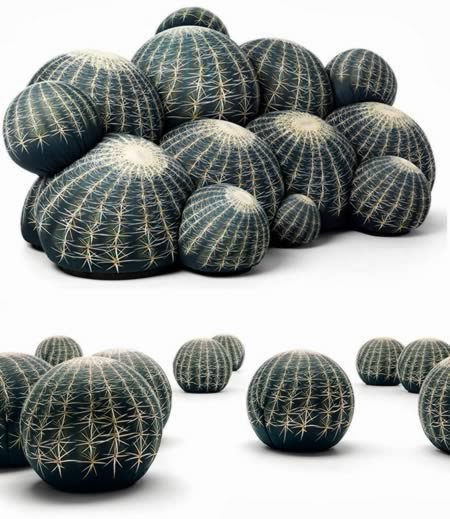 Showing as part of the "isn't it romantic" exhibit at MAKK in Köln in April 2013 was Paris-based Italian designer Maurizio Galante's "canapé cactus couch."
Made up of a cluster of prickly-printed cushions, the sofa plays on irony through the contradictory elements. The barbed plant is printed on bi-elastic fabric, with the seating designs complemented by matching ottomans. (Source) 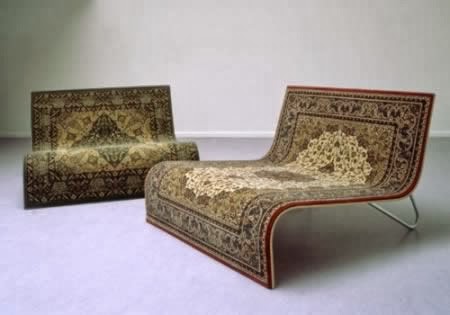 This is the best couch for watching Alladin.
"East meets West" by Tonio de Roover is a sofa that invites people together to sit, talk, or read. In a visual sense, "East meets West" is a sculptural object, an item that refers to a flying carpet that wants to rise from the earth. It is reminiscent of the Tales of a Thousand and One Nights, thus heralding a connection with non-Western cultures. The simplicity of the shape and the materials are used to emphasize this image. (Source | Via)

Showed at Milan Design Week in 2009, Montanara is a very creative piece of furniture designed by Gaetano Pesce. The couch creates the illusion of a mountain scene right in your living room, including cushion waterfalls and jagged support peaks of doom.
The picturesque couch makes you feel larger than life as you use nature's largest objects as your personal lounging tool. Just watch where you sit. Those pine trees can be a bitch. (Source) 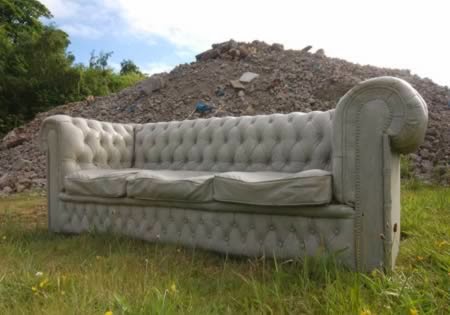 This couch, made with a solid block of concrete, was created by the British firm Grey Concrete as a demonstration of their new, precise molding techniques.
The sofa was made by taking a mold from a real Chesterfield, which is then used to make a glass textile reinforced casting. The cushions are a part of the casting. Before making the mold, the padding inside the cushions was replaced with a rigid foam which was modeled to make “bum prints.”
The molding techniques used by Gray Concrete pick up detail really well, so the concrete sofa really looks leathery. There's even a concrete 50p piece stuck down behind one of the cushions to complete the realistic effect. (Source | Via)