Menu
Home » Nature » 10 Most Precious Gemstones in the World

10 Most Precious Gemstones in the World 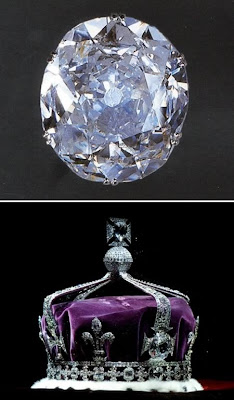 The Koh-i-Noor is a 106 carat diamond which was once the largest diamond in the world. Previously, it has belonged to various rulers in Indo-Pak sub-continent; today it lies in the hands of the British royal family and is part of the Crown Jewels.When the Koh-i-noor Diamond arrived in the hands of the British royal family it weighed 186 carats (37 grams). Prince Albert carefully searched for a diamond cutter with a very good reputation and headed to the Netherlands where he gave the mission of cutting the diamond to a certain Mr. Cantor, who began the difficult task. It was then presented to Queen Victoria. It became one of the Crown Jewels, and was last worn by the Queen Mother during her coronation as a mark of her becoming Empress of India.

The Millennium, a Football-Sized Carved Sapphire

The football-sized Millennium Sapphire, a gem carved with the likenesses of famous historical figures, is available for sale if the right buyer can come up with $180 million and promise that the 61,500-carat marvel will be housed where the public can view it on a regular basis.Designed by Italian artist Alessio Boschi, the Millennium Sapphire was conceived as a tribute to human genius and includes 134 subjects, including the faces of Beethoven, Michelangelo, Shakespeare, Albert Einstein, and Martin Luther King, Jr. A consortium of investors led by Daniel McKinney owns the Millennium Sapphire. Over the past 15 years, the impressive carved sapphire has been on public display only twice — in 2002 during the Academy Awards and two years later for the maiden voyage of the Sapphire Princess cruise liner.The 28 cm (11 inch) Millennium Sapphire was unearthed in Madagascar in 1995. It weighed about 90,000 carats in its rough state and lost about a third of its mass during the carving process, which took two years and was completed in 2000.

Dom Pedro, the World's Biggest Aquamarine Gem
The largest single piece of cut-gem aquamarine in the world is on permanent exhibition in Washington alongside the Hope Diamond and Marie Antoinette's earrings.Mined from a Brazilian pegmatite in the 1980s, and named for Brazil's first two emperors, the Dom Pedro Aquamarine occupies a distinguished place at the National Museum of Natural History, part of the Smithsonian Institution.The obelisk-shaped, blue-green gem, which was designed by famed German gem cutter Bernd Munsteiner, known as the "father of the fantasy cut," stands 14 inches (35.5 centimeters) tall and weighs 10,363 carats, or 4.6 pounds (two kilograms). 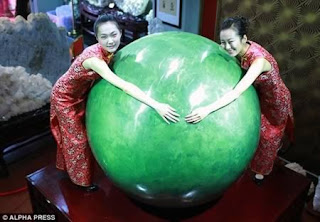 On November 21, 2010, the world's largest luminous pearl was displayed in Wenchang in South China's Hainan province. Weighing six tons and measuring 1.6 meters in diameter, the pearl is the largest ever discovered and is estimated to be worth two billion yuan ($301.197 million); in China pearls are prized more highly than diamonds. The stone, formed mostly of fluorite mineral, glows green in the dark. Its finders took three years to grind the raw gem down to its pearl shape.

The Graff Pink, the World's Most Expensive Pink Diamond 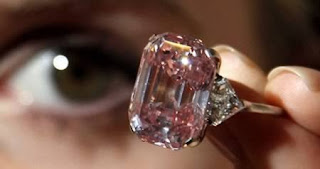 Laurence Graff is the world's number one dealer in diamonds and gems, but in 2010 he made sure that this reputation was confirmed with the purchase of the stunning 24.78 carat rare pink diamond.He is also Britain's richest living art buyer, splashing $24.1m in New York on two of Warhol's best works - "Elvis" and "Campbell's Soup Can." Laurence Graff also owns five luxurious homes in England, France, Switzerland, and New York, as well as a private Mediterranean yacht. He also owns his own diamond mine outside of Johannesburg, along with half a dozen properties in Mayfair. The amazing “potentially flawless” pink diamond has set a new record with the auction price stunning the staff at Sotheby's. The auction was laced with gasps as the bids kept coming in. Pink Diamonds UK had never seen such excitement. Britain's 36th richest man and Diamond geezer eventually paid £29 million ($45 million), the most ever paid for a jewel. 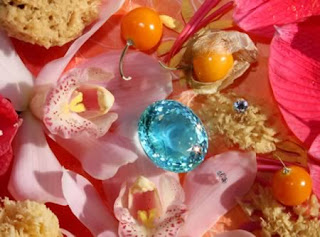 Montreal financier Vincent Boucher is the owner of the Ethereal Carolina Divine Paraiba, a Paraiba tourmaline with a mass of nearly 192 carats that is valued at between $25 million and $125 million. This sets a new world record for the largest cut Paraiba tourmaline.Paraiba tourmaline is one of the rarest jewelry gems in the world, favored by connoisseur collectors and showcased by elite jewelers worldwide. There is one Paraiba tourmaline (named for the Brazilian region where the vast majority are found, including Boucher's) mined for every 10,000 diamonds, and Boucher pointed out that only a total of 50 kilograms of the gem have been recovered to date. 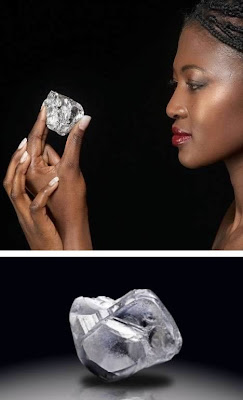 A massive 478-carat diamond was found at the Letseng Mine in Lesotho, a small kingdom in South Africa. It is the 20th largest rough diamond ever found, and it came from a mine that has already delivered three of the world's largest diamonds: the 603-carat Lesotho Promise, the 493-carat Leteng Legacy and the 601-carat Lesotho Brown. A similar but smaller-sized rough stone has recently been valued at $12 million. It is hoped that the uncut diamond will be capable of producing a 150-carat polished gem stone, dwarfing the current largest gem, the Koh-i-Noor Diamond.

World's Most Expensive Gemstone Per Carat Sold at Auction 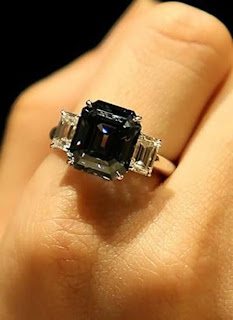 Identified as one of the unique gems in the world, a flawless blue diamond was honored in 2007 as the most expensive gemstone in the world. The 6.04-carat diamond was sold for $7.98 million at Sotheby's auction in Hong Kong. The flawless blue diamond fetched $1.32 million per carat. The blessed buyer is Moussaieff Jewelers based in London, who was glad to purchase this diamond from a private Asian collector, as it would be an addition to their rare collection of precious jewels. Blue diamonds are known for captivating the filthy rich gentry with glittering dark charisma. True, it is not the largest stone, but its revered cut and "vibrant blue" hue is what justifies its bulky price, which is almost ten times the per-carat price of regular white diamonds. 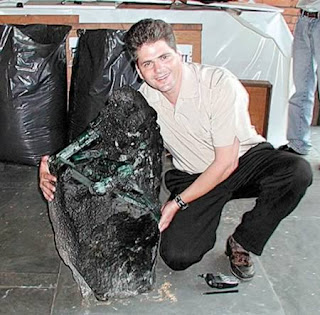 The Bahia Emerald is one of the largest emeralds and contains the largest single shard ever found. The approximately 840 lb (1,900,000-carat) stone originated from Bahia State in Brazil. It narrowly escaped flooding during Hurricane Katrina in 2005 during a period of storage in a warehouse in New Orleans. In September 2008, tt was subsequently reported stolen from a secured vault in South El Monte in Los Angeles County, California. While the stone has been valued at some $400 million, the true value is unclear. At one point, the emerald was listed for sale on eBay for a "Buy It Now" price of $75 million.After being moved from Brazil to the United States, various attempts were made to sell it without success; there were conflicting claims of ownership. Eventually, the emerald was seized from a gem dealer in Las Vegas and taken into the custody of the Los Angeles Sheriff's Department.

The Moussaieff Red, the Most Famous Red Diamond 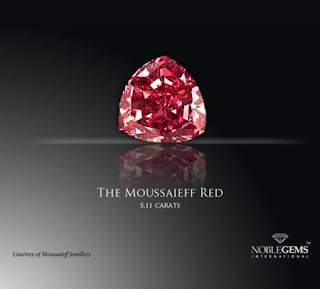 Once known as the Red Shield Diamond, the Moussaieff Red is the largest Fancy Red diamond in the world at 5.11 carats. Discovered in Brazil in the 1990s, the diamond has a triangular brilliant cut (also known as a trilliant cut) and was most recently displayed at the 2003 "Splendor of Diamonds" exhibit at the Smithsonian.