Menu
Home » Health » People » 10 of the World's Most Unusual Cocktails

10 of the World's Most Unusual Cocktails

Both weired and wonderful, here are 10 cocktails worth seeking around the world.
Doug Laming's Margarita 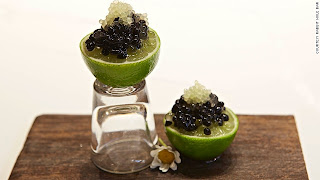 There are apparently only two Cointreau Caviar Spherification Kits in Australia, and the Rabbit Hole Bar has one of them.This magical piece of kit allows barmen to create pearls of booze that burst in the mouth.
"I love the different reactions you receive from first-time patrons when you bring it to the table," says Matthew Smith, assistant manager at the Rabbit Hole Bar.Barmen use sodium alginate, calcium lactate and the spherification kit to create balls of Cointreau.
Rabbit Hole Bar, 82 Elizabeth St, Sydney NSW 2000; +61 02 8084 2505; Doug Laming's Margarita: $11. 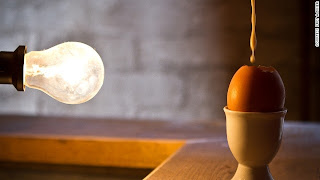 Served in an eggshell, the ingredients for this drink include rum, chocolate and cinnamon.Antoine Amédée Peychaud was an apothecary known for the brandy toddies he served out of egg cups at New Orleans Masonic gatherings in the 18th century.Two hundred years later, the team at Pret a Diner have recreated this historic cocktail.
The key ingredients are rum, chocolate, cinnamon and of course the chicken egg in which the cocktail is served.Fans of the drink include supermodel Bar Refaeli.
Pret a Diner, Zinnowizerstr.7, Mitte district, Berlin, Germany; Coquetier: $9.30. 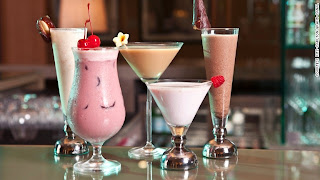 A non-alcoholic cocktail originally created for Muslims fasting during Ramadan.Compared to cows' milk, camel milk is three times as rich in Vitamin C and is full of iron, unsaturated fatty acids and B vitamins.The camel milk drinks will be available after Ramadan at Mijana, the Ritz-Carlton's Arabic restaurant.
"Camel milk mixologist" Mohammad Daoud originally created his range of camel milk cocktails for Muslims celebrating Ramadan.
Due to the high level of protein and other nutrients, it's the ideal drink to consume during Suhoor, the meal taken prior to sunrise during Ramadan, and comes in several flavors including strawberry, cherry and nut.
The Ritz-Carlton Abu Dhabi, Grand Canal, Khor Al Maqta, Abu Dhabi, United Arab Emirates; +971 2 818 8888; Camel milk cocktail: $6.20. 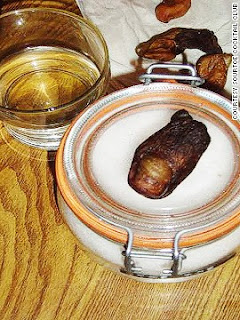 The Sour Toe cocktail served by the Sourtoe Cocktail club can be any drink -- what turns it into the Sour Toe cocktail is the addition of a real, preserved amputated toe, which is dropped into the glass.Although nobody seems sure of the origins of the drink, it first appeared in 1973 when drinkers who consumed a glass of Champagne or beer that contained the toe could then declare themselves true "sourtoers."
Today, the toe can be placed in any drink but one rule still applies: "You can drink it fast, you can drink it slow -- but the lips have gotta touch the toe."Some 60,000 people have reportedly tried the Sourtoe cocktail to date.
Sourtoe Cocktail Club, Downtown Hotel, Dawson City, Yukon; Sourtoe Cocktail: $5.80. 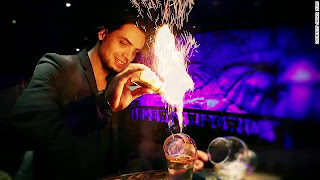 Jerry "The Professor" Thomas was an American bartender who's considered the father of American mixology.Thomas perfected the technique of lighting whisky and throwing the flaming liquid between two silver tankards.The late bartender inspired Shaka Zulu's Rum Blazer: a fiery concoction prepared at the customer's table and only served at a temperature below 50°F/10°C.It contains spiced rum, Grand Marnier Liqueur and cinnamon dust and was inspired by the famous Blue Blazer cocktail.
Shaka Zulu, London, UK; +44 0203 376 9911; The Rum Blazer: $17. 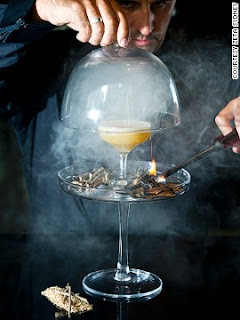 This Guy Fawkes-inspired cocktail is the creation of Sydney bartender Grant Collins, whose favorite ingredients include dry ice, liquid nitrogen and jelly.Previous creations have included the Bacon and Maple Syrup Manhattan and the La Premiere, which blends Appleton Rum with popcorn.
"For the Gunpowder Plot, we infuse gin with gunpowder flavors and shake it with fernet branca (a traditional herbal digestive) and egg white," explains Colin Tam, head bartender.
"This method leaves the cocktail with a thick layer of froth on the top. When the cloche is closed and smoke is added the froth is infused with a smoky, wooden flavor which changes the drink completely."
It contains gunpowder-infused gin, spiced gunpowder syrup and bitters and comes served in a smoking cloche amidst a pile of twigs and oak-scented fog.
Zeta Bar, Level 4, 488 George Street, Sydney, NSW 2000; +61 02 9265 8374; Gunpowder Plot: $20. 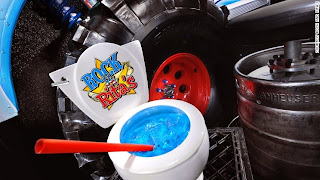 Drinking a cocktail out of a toilet bowl might not seem like the classiest way to start the night, but they go down a treat at Rock and Rita's in Las Vegas.The calorie-filled Crapper is a chocolate-based Piña Colada garnished with a Snickers bar. You get to keep the glass once done.
Rock and Rita's, Circus Circus Hotel & Casino, 2880 Las Vegas Blvd S, Las Vegas, USA; +1 702 691 5991; The Crapper: $25. 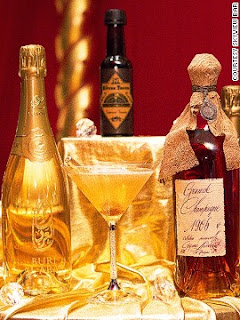 Only the finest ingredients go into this luxurious $1,347 cocktail: L'Heraud Grand Champagne Cognac, Luxor 24k Gold Flake Champagne and The Bitter Truth Jerry Thomas bitters.Served in a Swarovski Crystalline Cocktail Glass, which contains diamonds in the stem and which you get to keep, it was inspired by the Junsui Lounge in the Burj Al Arab, which features 29,000 Swarovski crystals.
Skyview Bar, 27th Floor, Burj Al Arab, Dubai, United Arab Emirates; +971 4 301 7600; Diamonds are Forever: $1,347. 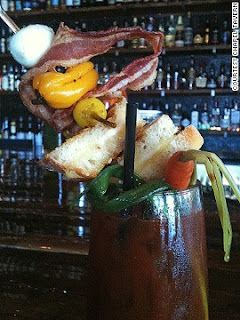 This unusual cocktail was designed to help drinkers recover after a heavy night and comprises a basic Bloody Mary with the addition of hot sauce, Irish stout, a garnish of pickled vegetables, quail eggs, bacon and a grilled cheese sandwich.
"The quail eggs and grilled cheese combined with the vegetables turns this drink into a little meal specifically designed to take the edge off of a rough morning," explains Chapel Tavern owner Duncan Mitchell.It forms part of the bar's "hair of the dog" cocktail menu.
Chapel Tavern, 1099 S Virginia St Reno, Nevada 89502, United States; +1 775 324 2244; Wakey, Wakey, Mary, Eggs and Bacey: $10.