10 Most Shocking Pictures Ever

The world, as we know it, has been in turmoil since its very beginning. Pictures of the past are reminders of the unspeakable horrors and sufferings that has been a part of our history and of course, the brutality that was and still is Man’s wont.
Following are some of the saddest and most shocking pictures ever taken. Do share your thoughts one these shocking images in comment section.

Atomic Bombings of Hiroshima and Nagasaki

Above are pictures of the only active use of Atomic Bombs in a war. At the climax of the Second World War, the US deployed two Atomic Bombs, one each on the Japanese cities of Hiroshima and Nagasaki, the effects of which killed 90,000–166,000 people in Hiroshima and 60,000–80,000 in Nagasaki.

Execution of a Viet Cong Soldier

The above photo, titled “General Nguyen Ngoc Loan executing a Viet Cong prisoner in Saigon”, is regarded as one of the most famed images in the history of journalism. Late American photographer, Edward Adams was awarded a Pulitzer Prize for the picture that shows South Vietnam’s Chief of National Police executing a Viet Cong soldier.

On September 11, 2001, terror struck America as two passenger airliners allegedly hijacked by Al-Qaeda operatives crashed into the twin towers, raising them to the ground and claiming the lives of almost 3000 innocent people. Several photos of the tragedy show people jumping to their deaths to escape the flames that erupted after the collision.

A year after the 2003 invasion of Iraq, shocking reports of torture, rape and homicide of prisoners held in Abu Ghraib prison began to surface, according to which the perpetrators of said acts were US military personnel in conjunction with Other Government Agencies.

The Child and the Vulture 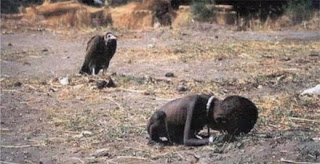 The picture, taken by late South African photographer Kevin Carter, shows a starving Sudanese child stopping to rest her frail body while crawling towards a United Nations feeding center as a vulture waits expectantly nearby. Carter was awarded a Pulitzer Prize for the photo. 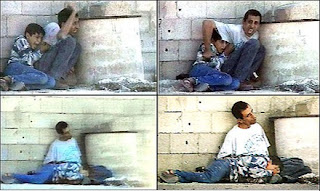 The above pictures are frames from a shocking scene captured by a France 2 cameraman near Gaza Strip. The footage shows Palestinian father Jamal al-Durrah, trying to shield his 12-year-old son, Muhammad al-Durrah, from gunfire while hiding behind a concrete wall, signaling and calling out to Israeli troops to stop firing. Jamal’s son was shot dead and he himself, gravely injured.

Hector Pieterson became an icon of the 1976 Soweto uprising in South Africa when he was shot dead in Police retaliation to a student protest. The picture above shows him being carried by a fellow student. 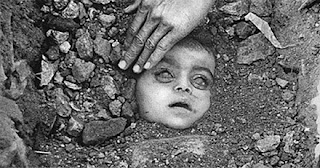 The picture above shows one of 3,787 deaths caused by the 1984 Bhopal disaster wherein a toxic gas (MIC) was released from a Union Carbide India Limited pesticide plant following which, approximately 40,000 cases of illness or disability caused by the exposure to the gas were confirmed.

This appalling photo shows the lynching of two young black men who were accused of the rape of a Caucasian woman and murder of her boyfriend. More horrendous than the tortured, bloody carcasses is the apparent joy on the faces of the lynch mob members.

The Last Jew of Vinnitsa “The Last Jew of Vinnitsa” (Left) shows a Jew on his knees in front of a mass grave about to be executed by a member of an SS paramilitary death squad, Einsatzgruppe D.